What is Painting and what are its main techniques II

In this post we will focus on the most common techniques in painting understood as artistic expression.

Remember that it is the second part of the post What is Painting and what are its main techniques I.

There are multiple techniques when painting, some with a long tradition over time, many more recent.

We will see some of them necessarily quickly.

It is the art of painting with colors dissolved in drying oils on a surface to create a painting.

The vehicle used to fix the pigment are different types of oils and the solvent is usually turpentine.

The oil painting technique has been the most widespread among artists since its discovery in the High Middle Ages.

Its diffusion is largely due to Flemish painters of the fifteenth century who systematically applied this technique, contributing to its consolidation and dissemination throughout Europe, a process that took place between the fifteenth and sixteenth centuries.

And his preference for his work by many painters is due to his versatility.

Oil painting is basically done with dry powdered pigment, mixed in the appropriate viscosity with some vegetable oil.

Some oils dry faster than others, not by evaporation but by oxidation.

Pigment layers are formed that are embedded in the base and, if the drying times are carefully controlled, will be properly fixed in the following pigment layers.

This oxidation process confers richness and depth to the colors of the dry pigment, and the artist can vary the proportions of oil, solvents and turpentine so that the painted surface shows a whole range of qualities: opaque or transparent, matt or glossy.

Used properly, the oil paint changes very little color during drying although, in the long term, it tends to yellow slightly.

The slowness of drying allows him to remove paint and review entire areas, as evidenced by studies done in the paintings of the great masters in half-world museums, until they rectified their paintings regularly.

The surface is painted with hot waxes, which contain agglutinated pigments, applied by brush or spatula.

The encaustic that is known to this technique, which derives from the Greek enkaustikos (burn), is a painting technique that is characterized by the use of wax as a binder of the pigments, the mixture has very covering effects being dense and creamy.

In classical antiquity, a mixture of wax with colored pigments was used for this technique and a solution obtained with wood and water ashes was added.

Alkaline solution of carbonate and potassium or sodium bicarbonate, a bleach of the time.

To this combination was added glue or resin.

The surface to be painted was heated and also the spatulas with the braziers, called cauterium.

Sometimes, the drawing was first made by engraving it with the hot spatula and then the incision was filled with the paint preparation.

The encaustic wax mixture, used by many artists today, is made up of refined beeswax, of the type used in cosmetic and damar resin.

Other types of wax that can also be used for encaustic are paraffin and microcrystalline, both derived from petroleum and carnuba and candelia, which are resins.

The finish is a polish that is made with linen rags on a layer of previously extended hot wax that in this case has a protective function.

Watercolor is a painting that can be done on wood, paper or cardboard with colors diluted in water.

The watercolor are obtained from pigments united with gum arabic or honey.

The technique of watercolor is to apply semi-transparent layers of that paint, which will be superimposed to achieve darker colors.

It is painted from light to dark, the white color is not painted, which acts as another true shade, but the white of the paper is reserved.

Similar to watercolor, with a differential element the presence in mixture of industrial talc or white zinc.

This additional addition to the pigment gives tempera the more opaque and less translucent character that differentiates it from watercolor, allowing it to apply light shades on a dark one, a procedure that in watercolor is considered incorrect.

It is ideal for ideal to apply light layers over dark ones and play with the light represented.

Acrylic paint is a kind of quick-drying paint, in which the pigments are contained in an emulsion of an acrylic polymer (vinyl glue, generally).

It is a water soluble paint, but once the paint has dried it is enormously resistant.

Also, when drying, the tone is slightly modified, rather than in oil.

It is a painting that begins to appear in the twentieth century and that each painter, like the rest of the techniques used as best has come.

Jackson Pollock used the acrylic paints as they leave the tubes to get new and thick textures while Morris Louis diluted them with a large amount of water to paint large fabrics that were left with an effect of dyeing rather than paint.

Also known as Chinese ink, it is used on paper and especially in black or sepia tones, using a pen.

It is very frequent in oriental art, especially in its pictorial calligraphy.

It is generally liquid although it can also be a very solid bar that must be ground and diluted for use.

Another resource to apply ink is the brush, which is basically used as watercolor and is called gouache, but the ancient technique called calligraphy or Japanese writing is also done with ink and brush on paper.

It is a technique that is often used a lot with drawing and artistic calligraphy.

Colored bars made from powdered pigments diluted in rubber or resin are used to form a compact and dry paste.

No tools are needed for its use, but are directly held by hand.

The word pastel derives from the pasta that is formed; It is paste model in the form of a bar of the approximate thickness of a finger that is used directly (without the need for brushes or spatulas, or any solvent) on the surface to work.

As a support it is common to use good quality paper white neutral weight and slight roughness, although the technique is versatile enough so that it can be used on other surfaces such as wood.

They are strong and opaque colors, the greatest difficulty is the adhesion of the pigment to the surface to be painted, which is necessary to fix with special sprays.

The quenching paint has as a binder an emulsion of water, egg white and oil and egg yolk.

The proportion is of an entire egg, plus an equal part of oil, plus one, two or three parts of water, depending on the fluidity that is to be achieved.

Instead of water, skim milk, fig latex or wax can always be used with water.

A well-made egg painting is among the most durable forms of paint man has invented. Under the dirt and varnishes, many medieval works of egg tempera are as fresh and bright as when they were painted. Normally tempera paintings have changed less in five hundred years than oil paintings in thirty.

Often the term fresco is used incorrectly to describe many forms of wall painting.

Actually a fresco is a very defined and ancient technique.

Ground pigments ground and mixed with pure water are applied on a recent mortar of lime and sand, while the lime is still in the form of calcium hydroxide.

Due to the carbon dioxide in the atmosphere, lime is transformed into calcium carbonate, so that the pigment crystallizes within the wall.

Pointillism is the technique that emerged in neo-impressionism, which consists of placing small spherical dots of pure colors, instead of the brushstrokes technique on the paint support.

By having physical relationships between the colors, the interaction between the primary and complementary, they achieve with the position of one another, the mixture in our eyes, from a certain distance from the frame, which is capable of producing the effect of the union Between those colors. 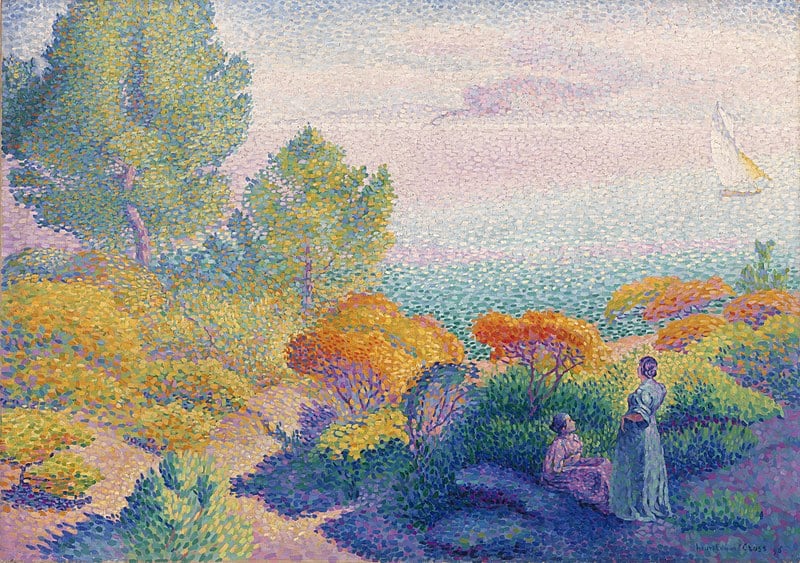 Dripping is a painting made with drops and splashes of paint, it is the pictorial technique characteristic of the American "action painting" one of the modalities of abstract painting.

The paint is some kind of opaque enamel or industrial varnish, such as those used for the first time by Pollock himself around 1947) is allowed to drip onto the fabric spread on the floor from a perforated container or spread by splashing, directly with the hands or by using brushes or any other instrument.

Dripping was frequently used by European informal movements in the 50s and 6Os of the last century.

It is done with a paint packaged in aerosols that is used by pressing the upper button so it comes out in a very fine spray and allows painting large areas, usually the walls of the streets, the paint achieved in this way is called graffiti.

The one that uses in the same work two or more of the types of paint mentioned above.

For example, when watercolors and pencil are used in the same work, or acrylic and pastel paint ...

There are not all the techniques that exist but yes, they are all that are.